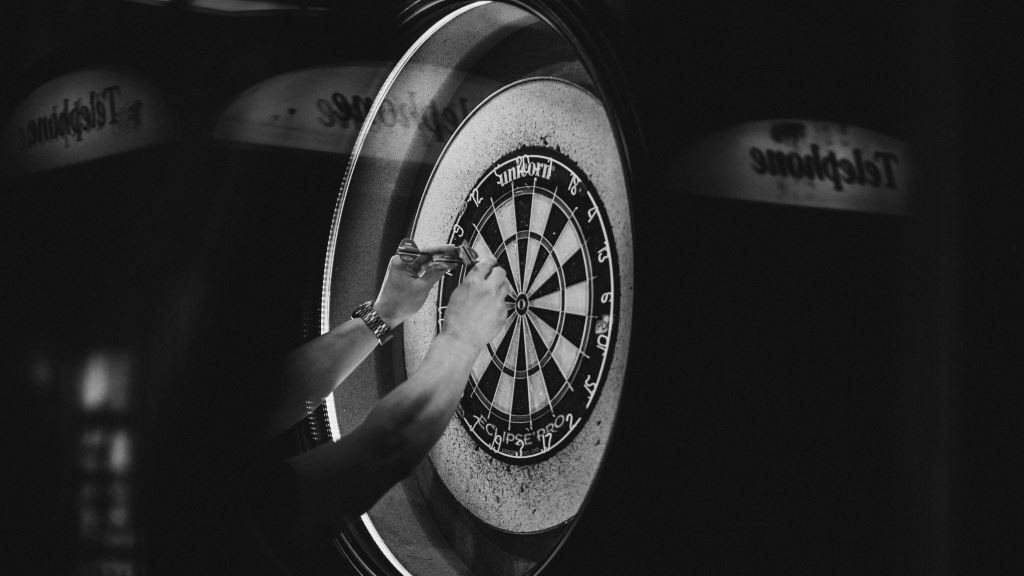 For some years now, darts has been enjoying increasing popularity. More and more people are watching TV broadcasts of darts tournaments such as the PDC Darts World Championship.

But more and more people are grabbing the arrows themselves. And there are many different reasons for this.

Darts is a sport for everyone. No matter what age you are or what physical requirements you have – virtually everyone can get started with the darts game immediately without any major entry hurdles.

In addition, the game of darts is simply a lot of fun and sociable.

Another advantage is that darts is a relatively cheap sport. At the beginning, a dart beginners set such as this one * , which consists of a dartboard and steel darts , is sufficient.

You can already start playing darts.

However, if you hang your dartboard on a wall at home, behind which there is another room, you will likely quickly get into trouble with neighbors or roommates.

Because every hit on the window creates a kind of bang. In the long run, this noise can get on your nerves.

In order to avoid anger and to show consideration for other people, it makes sense to insulate the dartboard.

Because in this case, of course, we cannot demand that the neighbor take over the sound insulation of the wall to the neighbor . On top of that, such an undertaking would probably not be crowned with success in this particular case.

Because heavy darts can pop quite a bit when they hit the target. That should not be underestimated.

Different ways to insulate a dartboard

There are basically different ways to insulate a dartboard. We will take a closer look at some of these possibilities in the following chapter.

Insulate the dartboard with a cork board

The material cork has very good soundproofing properties, which is why it is often used as impact sound insulation for various types of flooring.

A sufficiently thick cork board can therefore also serve as a sound insulation for a dartboard. Cork sheets like this one here at Amazon * are already cut in different thicknesses and can be glued directly to the wall with a special contact adhesive.

However, if you want, you can nail or screw such a cork board to the wall.

In addition to being a soundproofing dartboard, such a cork board can also protect the wall from stray darts. This is how you kill two birds with one stone.

When it comes to determining the right size of the cork board, one should keep in mind that the diameter of a standard dartboard is approximately 45 cm.

Depending on the radius in which the wall is still to be protected from striking darts, two or even more such cork panels can be attached to the wall.

Uncouple the dartboard from the wall

So that the noises that are unpleasant for the neighbors are no longer transmitted via the wall, it is of course useful to decouple the dartboard from the wall.

There are already many attempts of this kind.

Various in-house constructions always try to avoid a sound bridge to the wall. That works – depending on the construction – sometimes more and sometimes less well.

In the end, it’s always the result that counts. Can the neighbor live well with such a construction or are there still disturbing noises to be heard?

With all noise protection measures in the matter of darts, it is always important to get feedback from the affected neighbor so that you also know whether your own efforts are bearing fruit at all.

However, it would be best if the dartboard no longer had any contact with the critical wall, right?

There are of course self-made ideas for such a possibility. For example, you could place a stable wooden shelf in front of the said wall, which must not have any direct contact with the wall.

The dartboard would then be attached to the front of this shelf.

However, one should keep in mind that sound that is generated in the middle of the room is of course also transmitted to the wall. In the case of thin walls or very thinly soundproofed houses, the game of darts could possibly continue to be disturbing for the neighbors.

Use a dart stand

If the neighbors are still complaining about the dart training despite all the noise protection measures, then it may be time for a dart stand.

A dart stand offers the advantage that the dartboard no longer has to be mounted directly on the wall. As a result, of course, the noise that occurs when the arrow hits the target is no longer transmitted directly to the wall. Your neighbor should like that.

But of course a dart stand has other advantages. Because with it you are mobile and can set up and play a dart track almost anywhere.

A very practical and functional dart stand is the McDart Hybrid Tripod, which is suitable for both e-dartboards and steel dartboards. You can find this dart stand here on Amazon * .

In the following video you can see how the McDart Hybrid Tripod Dart Stand is set up and used:

In this video you can also see that the dart stand is stable even during the game and makes a very good impression overall.

Can a dart surround also serve as a dartboard soundproofing?

There are so-called dart surrounds on the market, which are very popular. A popular dart catch ring, for example, is this catch ring for dartboards * .

Such a dart surround ring is mounted around the actual dart board and ensures that the wall is protected from darts that are thrown next to the board.

In addition, the tips of the darts are of course protected.

Such dart surrounds are usually made of polyurethane (PU), which can easily accommodate the arrows.

Such surroundings only serve to a limited extent as dartboard soundproofing. Such a darts field is usually not suitable for soundproofing the wall. Even so, a dart surround can prevent arrows from ricocheting off the wall and falling to the ground.

Such surroundings provide a kind of soundproofing downwards, as heavy darts that fall on the floor can of course also emit a certain noise in the rooms below.

The game of darts is lots of fun and can be played in different places. However, if you use your dartboard in your own four walls, you can quickly have problems with neighbors or roommates due to the background noise.

However, there are good reasons why it is important for many dart players to be able to play and train at home.

In this article we have presented some ways to dampen the dartboard. With the dart stand, we have also shown a good alternative to hanging the dartboard on the wall.

The best earplug alternatives for sleeping and working

Noise protection in the garden: tips for more peace and quiet...

How to find a quiet Smart Hula Hoop