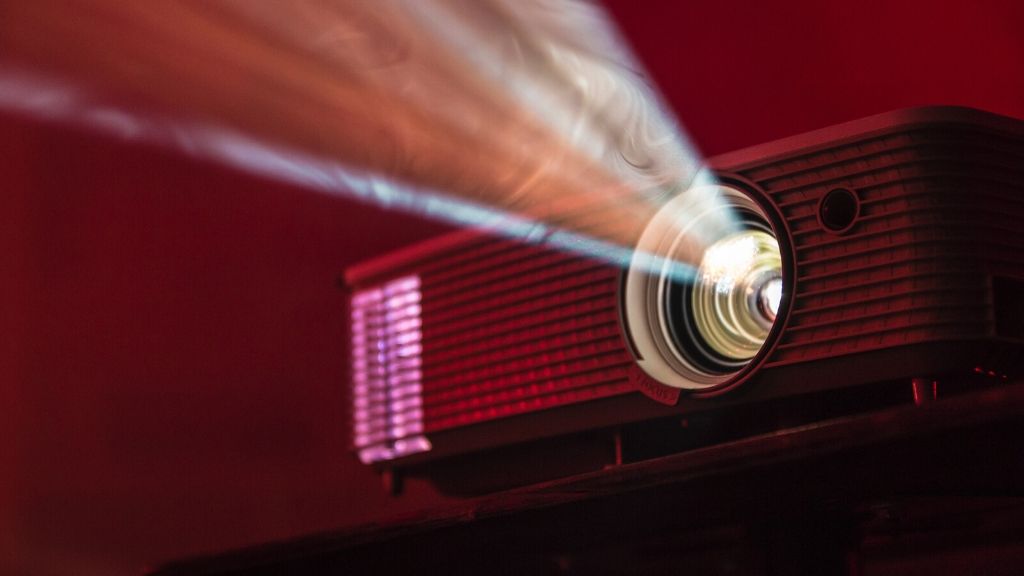 A home cinema is a very nice thing and brings the cinema experience a little way into your own four walls.

Some time ago I once again clearly noticed how important quiet projectors are.

Invitation to the movie night

Recently we were invited to a convivial film evening. The hosts live in a very nice and spacious old building and have set up a small home cinema in the living room.

Even if the term “home cinema” is perhaps a bit exaggerated, the living room with its comfortable seating, a projector and a large screen invites you to enjoy a movie.

The program featured the extraordinary and atmospheric film “Into The Wild”.

At the beginning of the film, however, I already noticed that something was bothering me. And that was the loud fan noise of the projector, which could be heard constantly, especially in the quiet passages of the film.

Personally, this fan noise literally “burned” itself into my ears, so that I could always hear this noise in the background, even in loud places.

However, I am also a bit sensitive when it comes to loud noises and always try to pay attention to a quiet environment.

After the film, I asked the hosts whether they would not be bothered by the noise of the projector in the long term. The answer was that they had gotten used to it a bit, but were currently looking for a quiet projector.

From my point of view, this is exactly the right decision, especially since the existing projector was a few years under its belt.

In the meantime, there are significantly quieter projectors that can make a movie evening an even better experience and give you that real cinema feeling.

Since we ourselves have already flirted with a projector at one point or another, we started to research what is possible nowadays in terms of quiet projectors.

Quiet projectors for home theater offer a number of advantages

If you want to set up a home theater, you cannot avoid a projector. Because with a beamer, projection sizes can be easily realized that are impossible even with the largest screen.

So if you want to create a home cinema feeling and would like to watch films in good quality on a large area or screen, you need a projector.

But live sports broadcasts, such as the soccer World Cup, are also enjoyed in good company with a projector. So every guest always has a good view of what is happening and is almost there live.

If, on the other hand, you only occasionally leave your television on to watch the news or other similar programs, you usually don’t need a projector.

A quiet projector has its price. Especially in the home cinema, this additional expense is worthwhile even on the first film evening.

The following points are often mentioned as general advantages of a projector:

Why are projectors often so loud?

The operating noises of a projector come from the built-in fan of the device. Such fans are also known from notebooks and PCs.

A fan is necessary to cool the lamp or the LED of the device. Because these can get really hot during operation.

The following applies: the brighter the projector, the hotter the lamp and the more it has to be cooled.

However, not every fan is equally loud. Smaller fans are often perceived as louder or shrillier than large fans.

Therefore, projectors of a larger design, in which larger fans can be accommodated, are often quieter than smaller models that only offer space for small fans.

When is a projector considered quiet?

One thing is clear: Projectors should work as quietly as possible so that the operating noise does not interfere with enjoying the film. But even if the projector is used for a presentation, an overly loud projector can of course be very disturbing.

So what should you watch out for with a low-noise projector? When is a projector quiet? And when is it possibly already too loud?

The answer to this question is not that simple and cannot be given across the board. And there are various reasons.

On the one hand, of course, hearing is not the same for everyone. One hears better, the other worse. The sensitivity is also individual. For example, it may be that a certain noise bothers one person while the other does not even notice the noise. We know this fact from our own experience.

We once had a quiet fan in operation in our bedroom , which was perceived and assessed completely differently in terms of its operating noise.

In addition, of course, it also depends a lot on how far away you sit from a projector. Of course, it makes an audible difference whether you sit directly next to the projector, or whether it is placed at a sufficient distance or even hangs on the ceiling.

When looking for a quiet projector, however, it can’t hurt to give specific figures in terms of volume. After all, you have to orientate yourself on some value when choosing.

Therefore, one can say that the operating noise of a projector should be below 30 decibels (dB) so that it is still considered quiet. The lower this value, the quieter the projector.

Many devices also offer an eco mode, in which the operating noise can usually be significantly reduced, since the output or the brightness is also reduced.

In many cases, this makes perfect sense, because maximum brightness is not always required.

Such an eco mode not only protects the lamp, it also uses less electricity. You should also pay attention to this when buying.

An alternative to a quiet projector is a so-called hushbox. A hushbox is basically a silencer box in which the projector is placed.

The inside of such a box is lined with material that has a strong sound-absorbing effect. So the fan noise can be well insulated.

Such a Hushbox is usually built by yourself, as the construction should be designed for the respective projector. Instructions for building a Hushbox can be found on the Internet.

As with almost all devices, there are also some features of projectors that you should pay attention to when buying. Below you will find the most important properties of a projector.

When looking for a quiet projector, the operating noise is of course a very important property. We have already discussed this in detail. But the following properties must also be observed.

A very important property of a projector is the brightness, which is given in ANSI lumens . The more ANSI lumens, the brighter the lamp.

How bright a projector needs to be depends on two factors in particular. Namely, on the one hand from the ambient brightness and on the other hand from the size of the screen.

If the projector is operated in a room with a lot of ambient light, a higher projection brightness is required for an optimal image than in a darker room that is equipped with a very dense and thick soundproof curtain to protect against light and sound, for example .

The resolution or native resolution of the projector is also an important purchase criterion. And here too, of course, it depends on the purposes for which the device is to be used.

At this point, we assume that the projector will be used in the home theater. For this, the projector should have a 1080p (Full HD) resolution. This is the common standard and will certainly remain so for a while.

However, you should know that 4K projectors are already available to buy, which offer a resolution of 4,096 x 2,160 pixels. The future certainly belongs to these devices. However, you have to dig deeper into your pocket for this plus in pixels.

You should also note that the source material (video source) must also be in 4K in order to enjoy 4K. Those who mainly use DVD shelves at home do not have such source material.

The contrast ratio is also a quality feature of a projector and describes the maximum difference in brightness between dark and light. A high contrast ratio is good for the quality of the image. The picture looks sharper and more natural.

Different projection methods can be used with beamers. Accordingly, there are various technologies that you should know roughly before buying.

LCD projectors, however, have to be cooled well, which often speaks against a quiet projector. They are also sensitive to dust and smoke.

DLP stands for Digital Light Processing and uses small mirrors and usually a color wheel to create the colored image. They also offer a higher contrast than LCD projectors.

DLP projectors have the advantage that they usually do not produce any dragging or burn-in of the image.

However, some DLP projectors generate additional noise due to the color wheel.

LED projectors use LEDs as a light source. LEDs shine thanks to their significantly longer service life than conventional projector lamps.

In addition, they consume less energy and do not get as hot with the same light output, which reduces the need for cooling. And where there is less cooling, there is of course less noise from a fan. From this point of view, LED projectors are ideally suited for a quiet projector.

However, the light output of LED projectors is significantly lower than the output of conventional projector lamps.

The LCoS technology is basically a mixture of LCD and DLP projectors. Liquid crystal displays are also used here, while the projection optics are similar to those of a DLP projector.

Wikipedia cites sharp images and a compact design as the advantages of this technology, while the disadvantages include easy dragging of the image and deteriorating image quality with increasing operating time.

The term laser beamer sounds a bit more spectacular than it actually is. In fact, a laser module is only used here as a light source. The other classic technologies, such as LCD, DLP or LCoS, are retained.

The advantages mentioned here are a long service life and lower maintenance requirements.

Of course, the intended use is also important. Because of course it makes a difference whether you want to use the projector exclusively for presentations in the office or as a home cinema projector.

As a rule, significantly higher quality demands are placed on projectors for home cinema.

Nevertheless, in certain cases it is advisable not to take the quality of a projector for the office lightly. For example, in our previous office we had a projector that we used during meetings and presentations.

For the soccer World Cup, we wanted to use it to watch a soccer game in our large conference room. This worked by and large, but the quality was not exactly satisfactory because the picture was simply too bright and washed out.

So if you want to occasionally watch video with a presentation projector, you should keep this in mind when choosing the device.

If you want to buy a projector for your home cinema, you are spoiled for choice. There are now many good projectors on the market.

In addition to all the factors in terms of image quality, you should definitely pay attention to the operating volume. Because an overly loud projector can quickly spoil the enjoyment of the film.